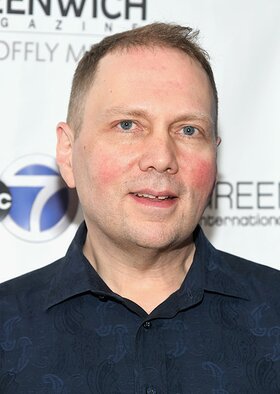 Hurdles are part of the writing process, but few authors have had to overcome as many as one of the world’s biggest sellers, Dav Pilkey.

The 55-year-old graphic novelist believes his personal difficulties during his teenage years not only shaped him as a storyteller, but also provided the resilience to continue in the face of regular rejection letters from publishers.

These days, Dav Pilkey’s books sell by the millions – his latest seven-book Dog Man series has so far sold 26 million copies – but the origins of the madcap superheroes came from a time when the budding cartoonist was expelled to the hallways by his infuriated teachers.

Diagnosed with ADHD and dyslexia, the young David Pilkey only survived his academic years by being the class clown.

It wasn’t until he earned popularity with his handmade comics that he found acceptance from his peers as the classroom storyteller.

Those early characters which featured in the school cartoons – Captain Underpants, Dog Man, and The Dumb Bunnies – would resurface in later life to become some of the biggest selling stories of the 21st century.

Dav’s talents as a storyteller and cartoonist were not only appreciated by his classmates, as a few years later in college a teacher would provide the springboard to turn his passion into a profession.

Dav explained: “I think the moment that I felt like perhaps writing and illustrating could be a profession for me was when I was in college and I had a teacher who took me aside one day and she said, ‘Dave, you are a very good writer and I love all the cartoons in your notebooks.’

“I was supposed to be taking notes, but I was drawing cartoons instead.

“But she said, ‘Have you ever thought about writing children’s books?’

“And I had never thought of that up until that very moment, but that sent me on the course that has led me to here.”

That nudge in the right direction led to 19-year-old David Pilkey writing his first book, World War Won, and then entering it into a national collegiate competition.

The prize was not only to have his book published, but to also take part in a promotional tour across the state of Ohio.

Dav explained: “Having my book published at such an early age was an incredible boost to my self-esteem.

“I was very lucky because I got to go and be sort of a traveling author and I got to go all over the state of Ohio where I grew up and speak at schools and talk to children.

“And so I talked about my experience sitting out in the hallway as a child.

“And I talked about some of the comic book characters I created when I was a kid.

“I would always mention Captain Underpants and it always brought the house down.

“And so at the end of all my speeches all the kids would raise their hand and they’d be like, ‘Are you ever going to make a book about Captain Underpants?’

“So I was like hmm, maybe I should do that.”

The rest, you would expect, is history, but hold on, this is the publishing industry.

It would take Dav many more years before publishers would take a gamble on his graphic novels.

Captain Underpants was one of around half a dozen books that were sent out to publisher after publisher before Dav finally got his break with Scholastic.

Was it his experience at school that prepared the Pizza Hut waiter to persevere with his dream of becoming an author? Who knows.

Dav continued: “I was rejected so many times.

“I remember a book that I did, ’Twas the Night Before Thanksgiving, and it was rejected 23 different times before a publisher finally took a chance on it.

“And it was very difficult with the rejections, especially so early in my career.

“I started to feel like maybe this wasn’t the right path for me – but one of the things that you really have to do is stick with it, you know.

“Not everything comes easy and you have to keep putting yourself out there and keep trying.

“I made a few more picture books and then I started to try to get Captain Underpants published.

“And I made a dummy for the book and I sent it out. It got lots and lots of rejections, but finally it found a home at Scholastic.”

This is the part where ‘the rest is history’. Dav’s weird and wonderful graphic novels have been bestsellers now for almost two decades, with Dog Man: Mothering Heights topping USA Today’s bestseller chart for 2021. Dav also had another four books in the top 100 of 2021.

I discovered PublishNation when searching on the net for a self publishing service. I found their website to be so well presented and the information so clear that I realised at once I had found the right place to handle the publication of my first novel.

All communication was handled quickly and professionally, and all charges were set out simply, there were no hidden fees put in small print as you so often find. Tracy, who dealt with most of the communications regarding the formatting and printing of the book, was extremely helpful and always double-checked with me before making any changes. When I compare my interaction with Tracy to that experienced by colleagues working with other publishers I realise how lucky I was to find PublishNation.

I was very pleasantly surprised at how quickly the whole process went through and I was delighted with the cover design.

Thank you, PublishNation, for helping me to fulfil one of my ambitions. It has spurred me on to write more books, and to use your services again in the future.