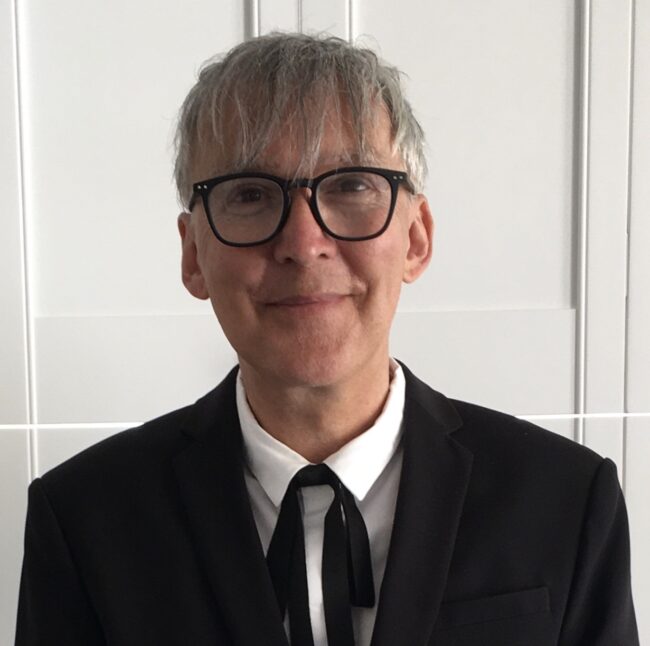 Award-winning writer Martyn Hesford encourages budding writers to break the rules, keep on going, and “believe in yourself. Tenacity is everything.”

The BAFTA-nominated writer behind such gems as Mrs Lowry and Son was born in Salford and graduated from grammar school to study acting at the Guildhall School of Music and Drama in London.

For close to a decade, he worked as an actor in many of the country’s best-loved theatres, including The National, the Royal Court, the Crucible, and the Bristol Old Vic, as well as earning leading roles in television and film.

But it was winning the Radio Times Drama Award for his first screenplay, A Small Mourning, that led to a permanent change of career.

Martyn’s ability for getting beneath the skin of characters with his writing led to a string of successes, including ITV’s The Old Curiosity Shop starring Derek Jacobi and Martin Freeman, Sky’s Dr Jekyll and Mr Hyde with John Hannah and David Warner, and BBC Four’s Fantabulosa! starring Michael Sheen. He has also scripted numerous popular stage and radio plays.

However, it was Martyn’s first feature film script which projected his work to the widest international audience.

Adapted from his highly acclaimed theatre play, Mrs Lowry and Son portrays the embittered relationship between artist L.S. Lowry and his bedridden mother.

Starring Vanessa Redgrave and Timothy Spall, Martyn’s character study brilliantly captures the talent and humour of the artist, while remaining sympathetic and true to his bleak existence under his mother’s control.

Another feature-film biopic, this time of Danny La Rue, is currently in pre-production.

Having also just released his first poetry collection through PublishNation, Martyn believes that while scripts and stanzas require different writing approaches, they achieve similar results.
He said: “For me, both are a form of magic – putting words on a page is writing spells.

“We are transported – anything is possible.

“It’s all feeling – but with different lights and shades.

“Poetry is invisible – what’s not said is as important as the said. Poetry happens in between the words.

“Poetry is an unexplained sigh while a film is about wanting to know what caused the character to sigh.

“You can savour a word, a line.
“Film usually leads you on a journey – a beginning, a middle, the end. Poetry just is.”

Martyn’s anthology, Lilac White, has been described by Sir Derek Jacobi as being ‘beautifully imagined’ and ‘cleverly written’.

Former Royal Shakespeare Company artistic director, Adrian Noble, writes, ‘This is a remarkable first collection. There is a delicacy in the writing, a numinous beauty… You enter his world and are held by his spell.’

Exploring the magical, the mystical and the sacred, his talent for evocative tones and vivid imagery shines throughout his collection.

Although influenced by poets such as Samuel Beckett and Jean Cocteau, Martyn admits he enjoys ripping up the rule book when it comes to composing his own stanzas – as well as his scripts.
He said: “When I’m writing, I let the feelings speak.

“I create my own structure for each piece – something that has come with instinct.

“Doing it, reading, watching, listening – there must always be structure of some kind holding everything together.

“I speak all my writing aloud – it must hold together in the air – a sort of density underneath everything.

“I’m all for knowing the rules – but smashing them up. Finding my own way. Asking myself why? How?

“I went to grammar school and became a punk. So that sums it up, really.

“Rules, once you know them, are made to be broken. A work is its own piece. Its own heart.”

Having established himself as one of the country’s leading cotemporary script and play writers, it could be assumed Martyn doesn’t lose too much sleep over the looming reaction for his latest work.

But having just published Lilac White and having both a novel, The Moon is Blue, and new film, Danny La Rue, in the pipeline he admits those ‘opening-night’ nerves still grip him.

“But I have no doubt about the work.

“I have been on a journey for a long time, and I can only write the way I find life, what I feel, what I think I know. Truthfully. Without tricks.

“I hope others might find something of themselves in the work, something they identify within.

“The secret to anything is: keep on going. Doing it.”

Mrs Lowry and Son screenwriter on his new book with PublishNation was last modified: May 24th, 2021 by PublishNation