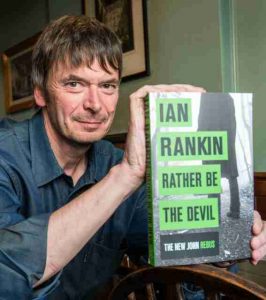 Ian Rankin’s reign at the top of the book charts can be traced back more than thirty years, and his latest novel, A Song for Dark Times, has topped almost every bestseller list in the country.
But the 60-year-old, whose books have been translated into more than twenty languages, understands better than most the difficulties of finding the formula for continued success.
Having produced roughly a novel each year since the release of The Flood in 1986, Rankin has become an expert in finding the plots, sub-plots, and characters to keep readers coming back for more.

Two of the most obvious, but regularly overlooked, tips Ian has for all writers is to Read Lots and to Write Lots.
The best writers are avid readers, and often take inspiration from their peers.

Four years after Rankin graduated from Edinburgh University, he completed his story of Mandy Miller for publication, and twelve months later, he published his first Rebus novel, Knots and Crosses.

During the years before he became a full-time novelist, he worked as a grape-picker, a swineherd, a journalist, and a taxman. He believes gaining experiences is key to Having a Story to Tell.
But persistence is also a major factor in getting the story you want to tell over the finishing line. As Ian says: Don’t Give Up.
The multi-award-winning writer is also adamant that criticism is a vital part of the writing process.

He advises all budding authors to Learn to be Self-Critical throughout the drafting process, and also to Learn what Criticism to Accept from external sources.
As well as his celebrated novels, Ian has also written a stage play, published three collections of short stories, and released a novella and a graphic novel.
He has also written under the pseudonym Jack Harvey.

But he has always been reluctant to drift too far from the crime genre that has brought him so many book sales.
As he explains, he believes all authors should Know the Market.

Readers usually have a preferred story genre, and it is worth knowing what is currently popular.

Like every other successful author out there, Rankin works hard to perfect his trade, but he does admit that skill, research, and determination can only go far.
His final tips for making it as a writer are simple – Get Lucky and Stay Lucky.

Being an indie writer and publisher, especially a ‘horror’ one (which doesn’t set us apart from other genres, but does serve to skewer the mind something odd!) meant I was taking on great tasks with each publication I put out. Changes in specific settings on book retailers’ websites meant new knowledge had to be acquired before, during and – AARRGGH! – after each book was released! I was single-handedly doing all along what could be done by more knowledgeable individuals. In my case, they came in the form of PublishNation.
With a team that understands the ‘pain’ and the stress of taking a manuscript from its fragile, submitted state, by doing all the formatting and uploading and other legwork to ensure its readability, I knew it was in capable hands. Choices are offered at affordable costs; whether you wish to see your book in electronic form or in print, PublishNation sees to it all.
I’ve yet to explore their marketing services, but I’m a believer in the onus falls on the writer. If they can’t be bothered to sell it, what chance has it got?! It is an area of PublishNation’s that I hope to encounter soon, for any/all help should be welcomed with open arms, regardless of your own efforts! That is my advice to you.
Know who you are; know what you’re writing. Use the services available to you, especially when they’re are fine and proactive as PublishNation’s.